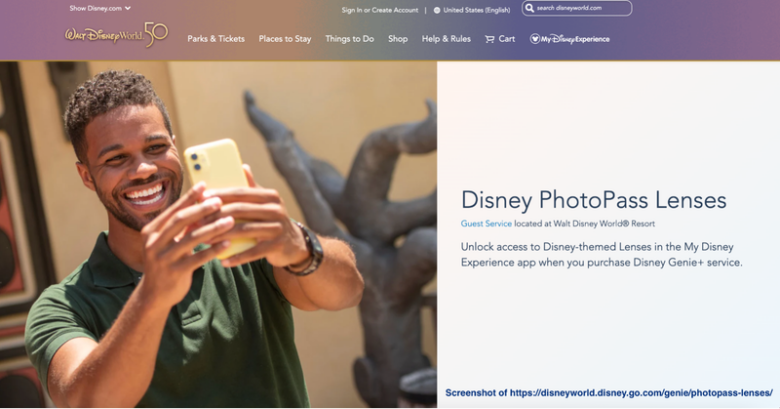 Hello. This is Oota from Daft Craft.
Recently, I’ve been updating the company’s news, but this time, I’m back with “Daft XR News”! As a huge Disney fan, I’ve been wanted to talk about this topic!

And that is…  the Disney Photopass Lenses, which you can experience with the new Genie+ service that started on October 19 at the Walt Disney World Resort in Florida, USA.
Apparently, this Disney Photopass Lenses is a new feature that allows you to enjoy taking photos using official Disney AR filters. I’ve seen some of the photos taken on the Internet, and I can’t help but be impressed.

So, in this article, I would like to introduce some AR filters that you can experience with Disney Photopass Lenses!

Here is a link to a video showing the AR filter on the official Snapchat account of Disney Photopass.
From a Disney lover’s point of view, this video is simply gorgeous! There are so many Disney characters in this filter. That alone is more than enough to make this AR filter amazing, but I’d like to introduce some of the amazing features from the XR perspective. 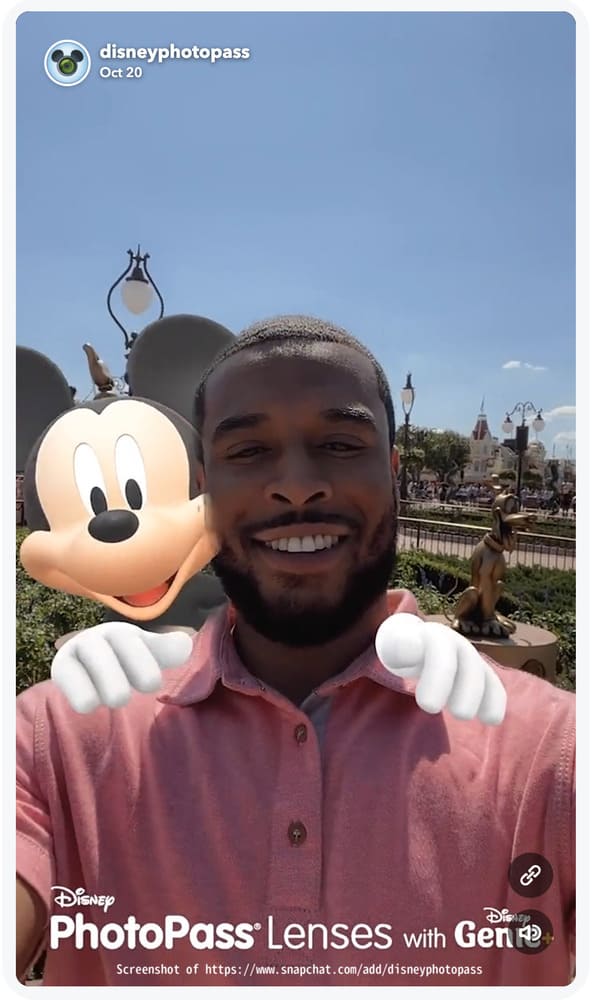 This is the fourth filter in the video that gives Mickey a big back hug. In this filter, Mickey’s hands are on the man’s shoulders, and Mickey’s body is behind the man’s body, which creates depth and makes it look like he is really giving you a back hug.
This is called “occlusion technology,” which is the process of recognizing obstructions in the real world and the objects in front of and behind them, and making a part of the AR disappear. If you’re wondering, it might be easier to understand if you pay attention to the border between the man’s and Mickey’s cheeks. 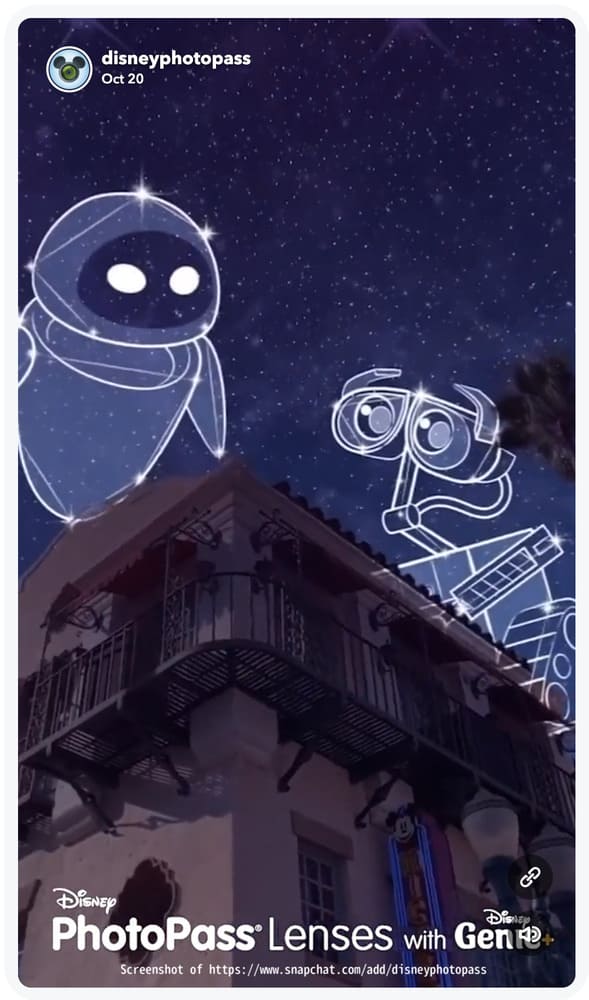 The next one is the planetarium-style filter, which is the seventh one in the video. This one probably uses a technology called “semantic segmentation” that recognizes the sky and applies a planetarium filter only to the sky. It’s a little hard to see in the video, but it recognizes not only buildings and pathways, but also plants as not being the sky, and excludes them from the filtered area. 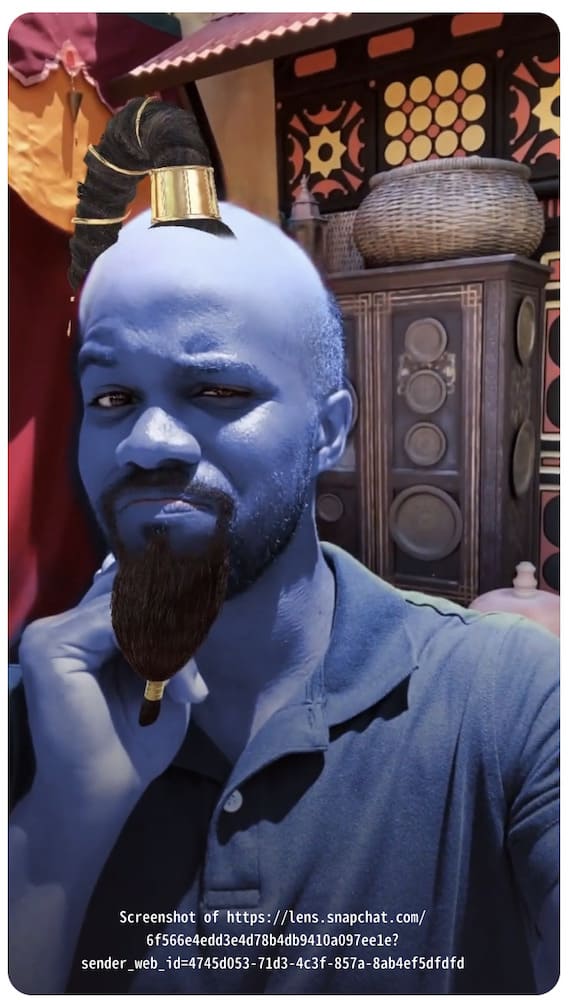 This is a filter called “Genie Reveal” that didn’t appear in the video, but is currently available on the official Disney Photopass Snapchat account. This is a very simple example to understand Diminished Reality (DR), one of the xR technologies. This man does not have a shaved head, but actually has short hair style.If it were just AR, you would be able to see the hair underneath the shaved head even if you overlay the graphic of Jeannie. But if you look closely, you can see that the background behind his head has expanded to make up for the gap to his head, making his hair invisible. This technique of “making things in the real world disappear and become visible” is called DR. 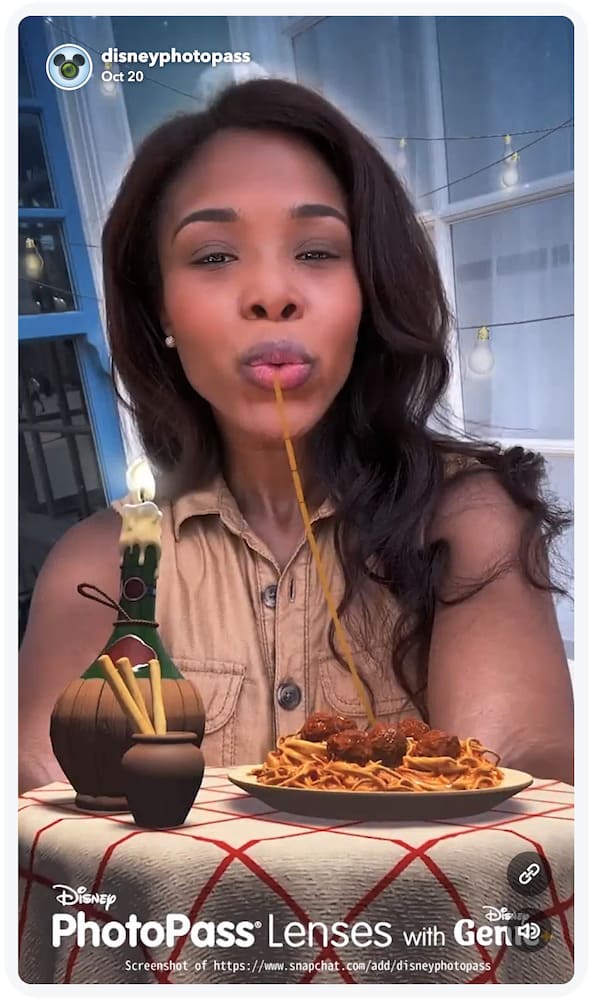 The last filter I’ll show you is the second one in the video, the filter from the movie “Lady and the Tramp”. It didn’t show up in the video, but if you actually try to use this filter, you will get a pop-up asking you to try it with someone else. Yes, you can recreate that famous scene where the main characters of the movie, Lady and the Tramp, eat both ends of a single spaghetti.
And apparently, you can take a picture with your doggie! This filter is also available on the Snapchat account, so if you want to give your dog a spaghetti kiss, you can try it here.

That’s it for my introduction to Disney Photopass Lenses!

Basically, just being able to take pictures with official drawings of many different Disney characters is amazing enough.
However, the fact that they have taken such a detailed approach to AR photography, such as making sure that the filter only applies to the sky because it’s planetarium-style AR, or making sure that you can have a beautiful shaved head because it’s a filter that lets you be Genie, is what makes it so special. Disney! That’s what I’m talking about.

In order to make it the happiest place in the world, they do detailed maintenance every day to keep the stories and themes alive. I felt this attitude in these wonderful AR filters.